[quote="bloodybunny"]
Here is your problem. Maximum numbers of half open connection ... lower it to somethin like 20 or go even lower.
Start from 30 and go down till the situation is acceptable. Depending on your connection speed/wifi device capability that number differs.
[/quote]

I never talked about slow performance.
I don't know who you are but you seem to me to be pretentious.
No hello, offtopic. If you want to give lessons, you are not the right place.

Yes, it's right !
Hum, trying to give you max informations :

PC with usb wifi stick connect to my smartphone with 4G :

[quote="4COMM"]
I never talked about slow performance.
I don't know who you are but you seem to me to be pretentious.
No hello, offtopic. If you want to give lessons, you are not the right place.
[/quote]

He is trying to help. Don't insult him.

Anyway about your problem. I suggest you use a networking monitoring tool (software), that will tell you from/to which network interface qbittorrent makes connections. And if you see that it gets traffic from the ethernet interface too, then we should report it to libtorrent-rasterbar bug tracker.
Top

I really don't think he's trying to help since it is entirely irrelevant, arrives from nowhere to tell me that what I do isn't effective and telling me how I should do when I do it I simply asked for anything. This behavior is in my view entirely that of a pretentious that I do not accept lessons. That all

Thanks for your support.
Have a good W.E

Btw. Sysinternals suite got some cool tools (tcpview for example), or you can use Fiddler too.
(Also, people are just trying to help, no need to start biting heads off.

I got the RC running for a week now, not straight 7/24 but there were times that I ran it for 2 days straight. I said that I would report after a week so here it is.

I didn't enountered anything weird or bugs, so far im very happy with it. Memory usage seemed high sometimes while the torrents were idling in seeding status (104 torrents at that moment) around +-60MB. I expected to be around 25-30MB max. While uploading this size can/will increase thats normal behaviour. Maybe I can try to disable OS cache setting and see how that goes. Neverthless ram usage isn't such a big deal and all works correctly

Is it possible to try out a RC with Boost 1.57 or is that the one with the hang and freeze problems? I thought that was 1.56.
Forum Rules and Guidelines

I tested the RC1 some more and found something strange.
On the left panel, under trackers, I see "98 (1)."
I checked the torrent and the closest tracker was "http://x.x.x.98/announce" (x is just some number omitted.)
I removed that tracker to be sure and the "98 (1)" was gone.

something like udp://tracker.abc.xyz:6969/announce < made up tracker
shows as xyz (1)

[quote="sledgehammer_999"]
[quote="s4nder"]
QBT doesn't remember the sorting pattern anymore. I like to sort my torrents by name. After restarting there's still an up arrow on the name column header but torrents are arranged randomly. I have to click the column header twice to get them arranged by name again.
[/quote]

Can you give a screenshot showing this and at least the first 3 letters of the torrent names?
[/quote] 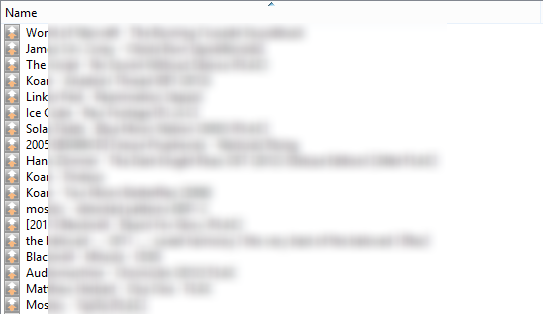 Thx for clarifying that for me. Was a wrong read on my part of the :

[quote="4COMM"]
However I find that it doesn't work because when I want to view content on youtube for example,
the load is very long, proof that Qbittorent use all my internet connections available.
[/quote]
Sorry if offending you so much.
Top

Can you give a screenshot showing this and at least the first 3 letters of the torrent names?
[/quote]

Interesting. Have you observed this on non-seeding tasks too?
Top

[quote="sledgehammer_999"]
Interesting. Have you observed this on non-seeding tasks too?
[/quote]
No, I usually only download a few things at a time at most and have a fairly fast connection.
Top

using RC for some days now. Here are my observations. All is on WinXPSP3(32).

1. Queueing is not working at all any more, since the first beta and in the current RC. It was working really nice in the last alphas.
Now, the only way to increase speed for well seeded torrents is to use 'Force' in the contect menu. In general, this collides with the queueing scheme... This will invite users to force many torrents in the end. However, I also wanted the forcing (with v3.1.something, when I did not yet know queueing was possible, but it was not working then anyway).
BTW, with queueing (in the last alphas) it seemed to me that inactive finished torrents would never be seeded. Which is a bad thing because it would reduce the amount of complete seeds, being invisible/unreachable to any other user.

2. The 'not responding' issue at right click on some torrents with many files is back in the beta and RC. It was completely gone in the last alphas.

3. Many tracker-sites seem to be on black lists of virus scanners. When starting and downloading the icons, AVAST blocks the access. The LOG is full of  messages.

4. I have seen RC twice without any activity (no D/L, no U/L) after 2 days with ~1E3 torrents. I was not able to get it back to life, not with changing the port, not with forcing some torrents. The first time there have been not any nodes; second time with ~300 nodes shown in status of main window.

5. I had to kill the beta and RC 3 or 4 times, because it would not disappear from the tasklist. There was nearly no activity after 10-15 minutes, when the last .fastresume file was written. This has not happened with the alphas in 1 month.

In general, D/L speeds are nice with the RC, better than with the last alphas. QB maxes out my connection, for the cost of seeding. Usually 1 or 2 (currently forced) torrent get most of bandwidth, all others remain slow. If I wanted to distribute bandwith to other torrents, I could only reduce the rate with Limit download rate.
Top

something like udp://tracker.abc.xyz:6969/announce < made up tracker
shows as xyz (1)